The restaurant chain Chipotle has banned the open carry of firearms from its more than 1,000 locations across North America because some folks in Texas open carried battle rifles into one of their stores. Some of these open carriers reportedly have also engaged in a war of nasty words with female proponents of limiting firearm rights.

This is an activism fail. These guys wanted to normalize the open carry of battle rifles, such as the AR-15 and AK-47, but their op backfired on them because:

Before my fellow gun-rights proponents get any crazy ideas, I do not support limiting the right to own and carry firearms. 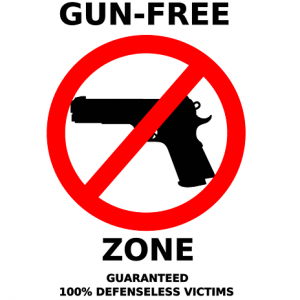 All I am saying is that if you want to have successful activism, then be smart about it. Stop waving your guns in people’s faces. They don’t like it. You’re just polarizing the debate instead of bringing us closer to a societal consensus in support of the right to self-defense.

Sure, Chipotle locations may now be less safe because fewer firearm carriers (open or concealed) may patronize them. Some may say that Chipotle is now a Victim-Ready Zone. And, if that’s true, then this poor activism is partially to blame.

10 replies on “Chipotle Rifle Open Carry was an Activism Screwup”

Well said. People need to understand we are waging a war to win the hearts and minds of those who have not yet taken a position on Second Amendment rights. Acting like these two dumbasses only hurts the cause.

If they walked into a restaurant in states with high amounts of CC permit holders, they might have found themselves looking at the business end of a pistol. Legal or not, it isn’t normal to walk into retail establishments with rifles and they could have caused a horrible incident.

It wasn’t a screwup so much as it was how the majority of you nitwits think.

Why the fuck would you take a AK-47 … ANYWHERE? What the hell is wrong with you people.

Keep it up, and it will be your own damn faults that those WEAPONS get ripped out of your hands.

I’ll give you this … those dumb fucks really shot your whole movement in the proverbial foot. Well done, morons.

Well, I like to take my rifles to the range. Got a problem with that, too?

How do you plan to rip those weapons out of our hands? With bigger weapons pointed at us?

The government then appropriates those funds to the politicians we elect and they then see that the laws we vote for are upheld.

So I will continue to pay taxes, and continue to vote for politicians who will work to take weapons out of people’s hands. I don’t have to take the guns myself, DEMOCRACY will do that for me.

Yes, I learned the same thing in grade school but this Disney fairy-tale is not actually how government works.

You are nothing more than livestock to the psychopaths in local, state and federal government. Only a few politicians at the top have any real influence over anything meaningful. They bully the rest into following the elite’s agenda and they pass into along all kinds of requirements that state and local governments must fulfill, thus tying their hands as well.

You deserve to be free and to be able to select a community to live in that meets your standards for gun rights limitations, no matter that such a community would likely be weaker than one where gun rights are respected.

But you will never get there via government. Never. A societal consensus is forming in support of gun rights.

It’s sad to hear from people who are still brainwashed but if you can read a site like this and still remain proudly brainwashed, then there is nothing anyone can do for you. You will have to learn the hard way.

Here are just a few points to rebut your comment.

– The politicians you vote for must balance the views of tens or hundreds of thousands of people. In the end, they do what they want, what will get them re-elected or benefit them personally. And if you complain, they will tell you to fuck off politely. See, for example, the bailouts in 2008 or 2009 when 90% of the public was against them but Congress approved them anyway. The politicians you claim to elect are chickenshit self-promoting beauty queens looking for a free ride on your hard-earned dime.

– You want gun regulation? That’s a lie. You want to take firearms away from people. You said it yourself. Why can’t you just be straight out honest about your intentions? Do you realize how ironic it is that you advocate pre-emptive violence (the Bush doctrine)? What’s next? Removal of knives, hammers …?

– Your tax dollars are spent on what the politicians want, namely bureaucracy, war, interest to bankers and similar.

– Are you proud that your hands are not dirtied by the ironic violence required to forcibly disarm peaceful people? Why? You’re a coward. How can you be proud to be a coward?

– Without basic rights, like the right to self-defense, democracy devolves to its most base and literal meaning, which is mob rule. Can you honestly support that and at the same time claim to be a civilized person? If so, how?

“your own damn faults that those WEAPONS get ripped out of your hands.”

Who’s going to do it? You? Of course not because you don’t have the guts.

You’ll just hide behind the voting booth curtain and expect others to do what you are too weak to do. If you think weapons should be confiscated, go ahead and start doing it yourself.

“Hide behind the voting booth curtain” … So you have a problem with Democracy, but you call yourself a Patriot?

Since when has it been a good argument to try and insult someone by calling them a voter. Yes, I vote in EVERY election.

The government then appropriates those funds to the politicians we elect and they then see that the laws we vote for are upheld.

So I will continue to pay taxes, and continue to vote for politicians who will work to take weapons out of people’s hands. I don’t have to take the guns myself, DEMOCRACY will do that for me.

Let me clue you in. We don’t live in a democracy and we don’t live by mob rule for a reason. The United States is a Republic that affirms certain rights that cannot be taken away, no matter how many ignorant cowards may vote for it.

World history is littered with millions of corpses of people who had the right to self defense taken away. It won’t happen here and certainly not from a fat ugly nerd.