The student, who wished to remain anonymous, said that he received the Facebook takedown notice for the below image. The image was posted to the Students for Lolberty Facebook page, a parody of SFL.

“We make fun of their [SFL’s] bad memes by making worse memes,” said the student, who is an administrator for the page. “I don’t even have anything against SFL. I think they are ok, I just think their memes suck.”

“I am not sure how much legal trouble I could be in right now,” the student added. “I got a notification I broke copyright laws and I was reported by someone in SFL.”

Roeder earlier took exception to a different image posted on the Students for Lolberty page that purposely says something extreme about German Jews as a form of humor, according to the student. Roeder claims to be a German Jew. In a post to his personal profile yesterday, in which he shared Students for Lolberty’s German Jew meme, he wrote, “As a German Jew I can only highly recommend any anti-Semites and racists to join and like this club of Students For Liberty-mocking haters.”

According to a Facebook help page, Facebook now responds to claims of copyright infringement by suggesting that the parties to the complaint work it out amongst themselves. There are penalties for repeat offenders. “It’s our policy to disable the accounts of repeat infringers when appropriate. Please ensure that all content you’ve posted and post in the future does not violate or infringe the rights of others,” says the help page.

The anonymous libertarian student and administrator of the Students for Lolberty page says that the German Jew meme “may have been made by a Jew.”

Parody is widely recognized under United States copyright law as a legitimate fair use of copyrighted material.

I contacted Frederick Roeder via both email and Facebook private message to get his comment but he has not responded. Facebook messaging shows that he received my message approximately 10 hours before publication of this article.

The Students for Lolberty Facebook page and its memes are clearly parody. Parody is widely recognized under US law as a legitimate use of copyrighted material. And both parties to the dispute appear to be inside territory claimed by the US government. In the context of government law, the issue seems clear-cut.

The parody even includes a modification to the Students for Liberty logo, as you can see at right. I am not a lawyer, but I find Roeder’s claim of copyright infringement, if indeed he made it, to be spurious.

I think that Roeder was offended by the German Jew meme and, to strike back, he filed this copyright infringement claim on what is an obviously inoffensive image. Perhaps he thought that Facebook would not out him. Perhaps he hopes that, over time, enough fake claims will result in the shutdown of the Students for Lolberty page.

If so, that is not only cowardly, but also flies in the face of libertarian principles and makes Roeder, and by extension Students for Liberty, look like a petty fascist.

If parody is protected even by the United States government, then how can you consider a legal attack on parody to be consistent with libertarian principles? If you can not respect parody, then you are further on the continuum towards fascism than the US government. And you’re a national staff member for a large libertarian student organization? Yikes.

Whoever used the Facebook reporting system to take down Students for Lolberty’s image has committed an act of aggression. They have violated the non-aggression principle, our most basic guiding concept.

The complaining party not only filed a false report (that’s fraud) but has also effectively threatened to use government action to penalize the anonymous libertarian student.

This student has not entered into a voluntary relationship with the government authorities who could penalize him or her. Hence, any action on their part to penalize the student will be aggressive in nature.

Accusing someone of copyright violation is similar to accusing your neighbor of violating the ordinance requiring him to water his lawn or not plant a vegetable garden in his front lawn. It’s a veiled threat to use government action – aggression – to force his compliance with what you think he should be doing.

Disputes can be adjudicated on a voluntary basis without the use of aggressive agencies such as government courts or police.

The complaining party likely also violated the terms of his private agreement with Facebook by filing this false report.

At the absolute minimum, this is an act of intimidation that chills free speech in the libertarian communities. For the good of our communities, we must not let such actions pass unnoticed. We are under assault from all sides by omnipresent government surveillance, financial theft, oppressive regulations, out-of-control cops and gun grabbers. Are we to import this oppression into our own communities now? Are we to give up the last thing we have, i.e., freedom of speech? And will it be fellow libertarians who take it from us?

You can contact the board members via email to ask them.

There is a growing culture that prides itself on getting a reaction out of people through the use of extreme content. When I was a kid in the 80’s, this took the form of some kid saying ridiculous things to get a rise out of you. After awhile, we figured out this person’s game. They thrived on outraged reactions. When you get upset, it just feeds their further attempts to get a rise out of you. The proper way to handle them is to pay them no mind.

Frederik Roeder may not have learned this. By apparently giving in to his butthurt (over an admittedly offensive image), he has only given the Students for Lolberty artists more fuel for their jimmy-rustling. Wrong move.

When you like something and find it useful, promote it. Endorse it. Share it. Write about it. Donate to it – whether it’s your work or anyone else’s.

But when you find something you don’t like, your best bet is to ignore it. This is true in more cases than not.

If we all ignore the things we don’t like, then we take power away from those things. Simultaneously, we can focus on those things we do like and find constructive. By doing so, we build them up while allowing the other stuff to wither on the vine. Total win.

I name Roeder because I believe in naming names and holding people individually accountable for their actions, whether they are third parties, state employees or even fellow libertarians.

I have direct knowledge of many libertarians suppressing the names of libertarians who have engaged in wrongdoing and even actively covering up said wrongdoing. But I think that in order to be consistent, I have to out not just the doctor who threatened to take my son or the marshal who attacked and framed me but also the libertarian who defamed me, who threatened me or any other libertarian with a credible and substantiated threat of wrongdoing against him.

It’s a tribal society that circles its wagons for insiders while painting outsiders as purely evil. Libertarians must not be that way. We must be evenhanded and precise if we are to progress towards the freer future we seek.

If we can’t apply our principles equally across the board, then we are just hypocrites under a different banner. And the world needs better. 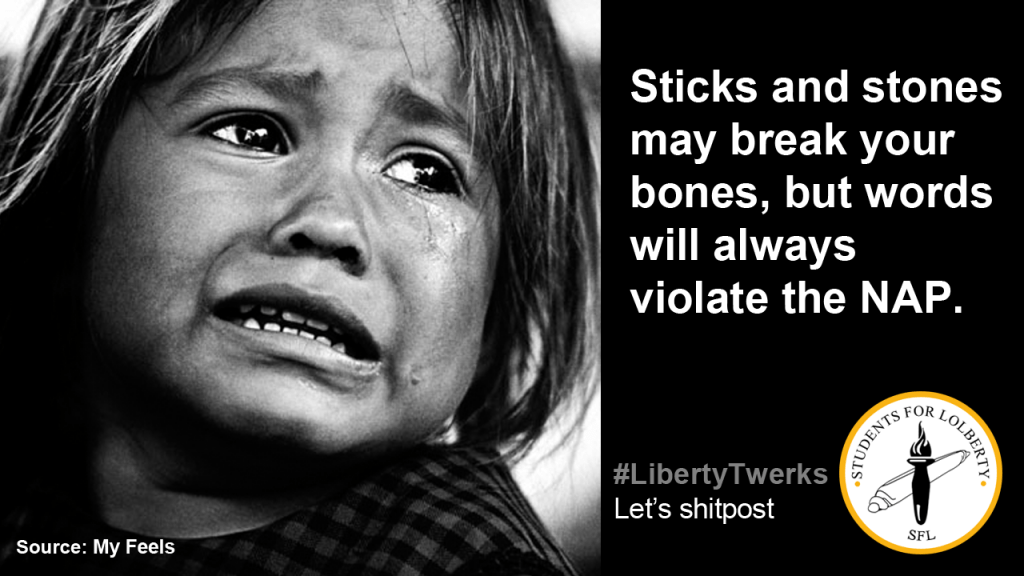 Here is the text of the notice the student claims to have received from Facebook. He did not take a screenshot.

Facebook is not in a position to adjudicate disputes between third parties. If you believe that this content should not have been removed from Facebook, you can contact the complaining party directly to resolve your issue:

Don’t file false copyright claims because Facebook will out you and you will look really foolish. Let’s cut this shit out and find more ways to work together to achieve a freer world.

(Also, please don’t make this worse by sending threatening messages to Frederick Roeder. Contact the Students for Liberty board members instead.)

2 replies on “Facebook Outs Copyright Complainer at Students for Liberty”

We must secure the existence of parody and a future for libertarian-themed shitposting. 14/LOL

Well for one, it’s libel. For Facebook to just proclaim and act blindly on copyright infringement without any proof or lawful involvement is just slanderous harassment and they are liable for damages.

Secondly Facebook and really all other websites are violating several felony and state laws (They’re located in California) involving discrimination. The thirteen amendment prevents any private institution from denying service. Something a lot of people just seem to put out of mind though it’s what put an end to “no niggers allowed” demonic shit.

Third, while it is hard to say for sure… Facebook could be involved in racketeering, tax evasion, and fraud against many third party investors. Hell, “terms of service” is a legal fraud in and of itself. I’m not saying these things to attack Facebook personally as much as I’d love to see Zuckerberg shot or jailed, I’m saying this for the entirety of the internet. It’s a crime ring. I’m honestly shocked to see some libertarians beginning to realize that and not buying into free market porn of the week like Bitcoin or something. Hopefully this will wake more libertarians up that there is a time and a place for government. One such time and place is putting moderators behind bars. All of them. Be they Facebook, Google, or Microsoft when they ban paying God damn customers from Xbox Live.