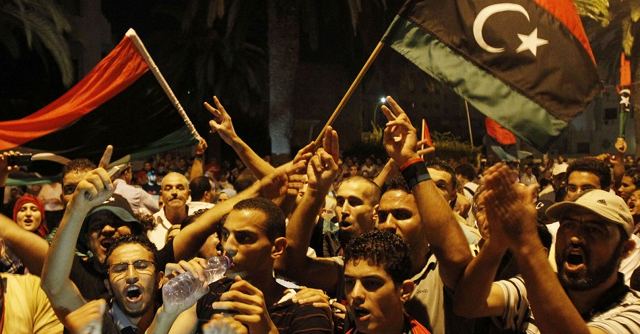 During the six months of fighting, both the rebels and Colonel Qaddafiâ€™s forces repeatedly overstated or misrepresented their battlefield abilities and accomplishments. The rebels said they had seized cities, only to be pushed back hours or days later; on Tuesday, Colonel Qaddafiâ€™s forces insisted that they controlled Tripoli. In the early days of the NATO intervention, optimistic claims about the rebelsâ€™ capacities and battlefield gains seemed intended to reassure queasy domestic audiences that a quick victory was possible. #

David D. Kirkpatrick and Rod Nordland note in today’s New York Times that both sides in the Libyan civil war are, at best, inveterate liars. You can’t really believe a word that comes out of either of their mouths. The fog of war is such that truth is dead, buried, decomposed and utterly forgotten. If both sides can’t stop lying, what makes anyone think that one side is any better than the other?

Muammar Gaddafi, the apparent target of the rebellion, vowed yesterday to resist for years and turn Libya into “volcanoes, lava and fire.” This is the author of the Jamahiriya direct democracy concept? This is the “great man” who wants to liberate Libyans through socialism? How does burning Libya advance his avowed cause?

The situation in Libya appears to be more complex than just the rebels vs Gaddafi. Here an unidentified and possibly Russian news team document alleged NATO attacks on civilians. They claim that the Libyan army is defending civilians from the rebels and Al Qaeda. Al Qaeda? Yes, there appears to be some truth to this. Don’t be scared though. These guys seem to be more guerrilla than terrorist.

Even if the rebels win, and their ho-hum constitution is enacted, they’ll at best be under the colonial thumb of the British. According to Simon Jenkins of the UK’s Guardian, the British have constantly expanded their role in this war, from no-fly zone to bombing Tripoli to even Apache helicopter attacks. It’s as much, or more so, a British victory as it is a rebel one.

In fact, the UK is sending “a team of advisers” to manage the reconstruction. Among other things, the UK wants Libyan bureaucrats to remain in power. The story is just a little too convenient for my tastes. Gaddafi as Darth Vader. The rebels as, uh, the rebel army. I’m sure this plot rehash is resonating with the public, but is it accurate? Aren’t the bureaucrats part of the problem too? Has this whole war just been about changing the face at the top?

The New York Times is hosting a “Room for Debate” on the Libyan civil war. The writers made 7 interesting comments.

Without Qaddafi, though, the various elements within the T.N.C. will turn its attention elsewhere, and perhaps toward each other. The council includes every faction imaginable â€“ liberals, mild-mannered technocrats, socialists, salafis and, of course, the Muslim Brotherhood – Shadi Hamid

Sudden political change – the kind NATO and the Arab League are forcing on Libya – is expensive and can easily go wrong. Although the rebels had months of fighting during which they could prepare, an organic societal change would take much longer and involve all of society (not just the fighters and politicians). It shouldn’t be surprising to anyone if interncine fighting breaks out after Gaddafi is ousted. Maybe it was inevitable. Maybe a little less shock and awe would have turned out better.

2. Let the Loyalists Keep their Arms

Qaddafi loyalists in particular may need some assurance that they will not be targeted once they hand their weapons in. Perhaps a weapons buyback program modeled on other post-conflict countries could be considered. – Sultan Sooud Al Qassemi

Why not let these people keep their arms? That’s a considerably stronger guarantee of their lives and freedoms than a constitution or empty promises.

3. Only the Face at the Top is Changing

… there will also be no dismantling of the army and police as there was in the wholesale and disastrous de-Baathification of Iraq which led to years of violence and instability. – Charles Gurdon

The bureaucracy stays in place. The police and army stay. What exactly is changing in Libya? Control of the oil … anything else?

4. Let Everyone Keep their Guns

For Western governments, the most enduring consequence of Qaddafiâ€™s fall may be one that has gotten little attention. As the country is now awash in arms, what will happen to those weapons? Some are almost certainly in the hands of radical groups fighting Qaddafi now, and others may make their way to other groups in the region through trade or theft. Getting control of the arms situation requires strong police institutions, an intelligence capability, and national will. – Jon B. Alterman

I’ve heard that the rebels are being armed by NATO member nations, Qatar and by Libya’s own stockpiles. I’ve also read that Al Qaeda members are secreting weapons out of Libya for use elsewhere. If this is such a concern, maybe NATO and Qatar should cease their arm sales. But, in reality, perhaps it is the suppression of self-defense weapons that has led to the injustices that sparked this rebellion and motivate groups like Al Qaeda. If that’s true, getting the guns back isn’t really that important. Maybe more distributed gun ownership is a stabilizing factor.

The first order of business will be to disarm the population in order to re-establish law and order and ensure a smooth transition to a new government. – Nasser Weddady

You can’t establish law and order in the victim-ready zone that one-sided disarmament creates. If the rebel government wants to disarm the population, let them lead by example. Let them be the first to disarm. An armed society is a polite society because people aren’t at the mercy of rioters and roving criminal bands.

6. The Guns “will Fall Silent when there is no Need for Them”

As for the guns, they will fall silent when there is no need for them. – Mansour O. El-Kikhia

Here is an elegant rebuttal to the proponents of civilian disarmament. As long as there is no need for guns – as long as no one is attacking or hurting others – then they will not be used.

After spending years in Afghanistan I was disillusioned by the lack of optimism the Afghans showed for their political situation. At best, it was apathy, at its worst, insurgency. In contrast, what struck me in east Libya was the populist desire for change: on every wall, on every car, on every person were symbols of the revolution. A mass volunteer movement did everything from trash collection to traffic policing. Many paid for weapons from their own pockets to fight at the front lines. Only then could I truly grasp what a “people’s revolution” meant. – Susanne Tarkowski Tempelhof

The rebels would be wise to embrace the principles of this mass volunteer movement to organize Libyan society rather than seeking to build a western-style constitutional tyranny.

Gaddafi is willing to burn Libya to stay in power. The rebel-NATO-Arab-League alliance only wants to change the face at the top of the org chart and who controls the oil. Both are liars. Talking heads are promoting a Libyan victim-ready zone. The only positive developments I see are the mass volunteer movement in Eastern Libya and the fact that everyone in Libya now has access to self-defense tools (guns). Instead of forcing a (foreign-sponsored) government on Libyans, let them self-organize their institutions on a consensual basis. Only then will a lasting peace have a chance.

3 replies on “Does it Matter Who Wins the Libyan Civil War?”

the world needs more of option 7! although of course we would say that.

back during the Egyptian uprisings I hoped that the voluntarism exhibited during the upheaval would endure. unsurprisingly my hopes soon flickered out. it seems the world is not ready for liberty. I am sure there will be many more riots and revolutions that miss the point. I cannot understand how the Egyptians that organised stateless solutions for refuse collection, medical treatment, neighbourhood security, food distribution and global media relations during the uprising could not popularise such stateless solutions beyond that period. even now the former revolutionaries are probably arguing about state refuse collection!

every revolutionary still wants to wrest the reigns of power from the old elite – different face, same coercion. everyone still wants to live at the expense of everyone else. statist ‘democracy’ is, and for a long time will be, the aspirant ideal of the world.

the western powers were inevitably behind most of these events.

one day though, one day…

I think our job is to make the knowledge of stateless ideas more explicit and well-known. Education is still our first job. Had the Tahrir-square Egyptians been conscious anarchists, they would have had a better chance. In any case, I can’t imagine how hard it was for them and defeating the army is almost impossible.

absolutely, all praise to them for achieving what they did or for even trying in the first place. unbelievable really. the idea of a stateless society is so far removed from today that I often overlook the smaller steps on the path to liberty – i didnt mean to denigrate the efforts of those egyptian libertarians (after all what is a revolutionary but a libertarian?)

I’m completely with you on education being the strategic priority. with reference to egypt, lybia et al i think the folks at c4ss/the molinari institute were onto a winner with the http://www.blackcrescent.info (which in searching for i stumbled on this http://www.minaret.org/mission.htm ) blackcrescent seems to have fizzled out a bit but translation is difficult.