Who stomped on Lauren Valle’s head at the Rand Paul – Jack Conway debate in Kentucky last night? I don’t know that yet. I also don’t know who held her down. (Update: His name is allegedly Mike Pezzano.) But I can say with complete authority that the attackers’ actions were plain wrong. Lauren Valle is a veteran, possibly paid, activist. She appears to have worked with Greenpeace and MoveOn.org. She allegedly stormed the debate last night in an attempt to embarrass Rand Paul. That’s legitimate political protest. Even if the attackers thought she posed a deadly threat to Paul, they used excessive force. 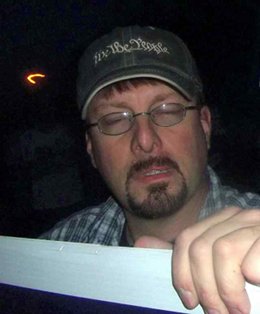 Was her act aggressive and therefore deserving of retaliatory force in the minds of right libertarian minarchists? Not from what I could tell. The event was open to the public. There are no allegations of violence on Valle’s part. What if she did commit some kind of aggressive violence? Then it would be valid to stop her, but only with the amount of force required to do just that. These men used excessive force. Thus, even by a Randian calculus, the attackers are in the wrong.

Is this a set up? Was it staged? Maybe. The force is very brutal and obvious. In these analogous situations, Tea Partiers did not respond with violence, or at least not as much violence. The attackers demonstrated surprising coordination. That implies planning or previous association. Valle appears to smirk in her post-stomp interview. It’s hard to believe someone could be that calm after a head-stomping. TPM notes “At the end of the clip, Valle is alert and speaking with the press. However, MoveOn’s political director Ilyse Hogue tells TPM that Valle is in the hospital and they’re awaiting word on her condition.” Either they hurt her so badly that she was in a daze when she gave the post-attack interview or something is fishy here.

I hope those on the right don’t feel the need to issue apologias. Yet here’s one that calls Valle a leftist and “unhinged.” Hot Air and Red State are silent so far. One right libertarian friend on Facebook claimed the attackers were justified in defending Paul from Valle but admitted that they used excessive force. Whether this is staged or not, it was wrong and the principled right would be wise to condemn it. At most, the Paul supporters could have stopped Valle. That’s the extent of legitimate defensive action. Their smartest course of action was to let Paul’s security detail handle it.

Some on the left want to incriminate Rand Paul with this incident. That’s also wrong. One commenter named Stephen said, “If people in Kentucky were honest and thoughtful people they would see what type of coward is backing the Paul creep.” I would hazard a guess that all candidates are backed by one coward or another. It’s logically fallacious to say that just because a certain person is associated with Paul, that Paul is therefore morally lacking as well. 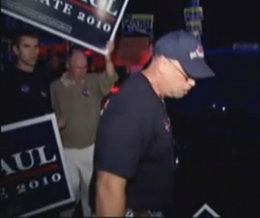 Here is the guy who stomped her. Who is he?

Should the attackers go to jail? No, they should make restitution for their crime. Going to jail accomplishes nothing. It doesn’t benefit the victim. It simply reinforces the violent paradigm that in part leads to incidents like these. Valle should be made whole in whatever form she and the attackers can mutually agree upon. If the attackers can’t reach a reasonable settlement, they should be banned from civilized society. Free market justice is superior because it’s victim-oriented and doesn’t require the cruel and unusual punishment that is prison.

Here’s an idea. Start a fundraiser on The Point to reward whoever brings the attackers to justice. Like the Krugman-Murphy debate, people can pledge reward money and will only be charged if someone actually brings forward information that leads to holding these guys accountable.

Irony strikes again. One of the attackers wore a “Don’t Tread on Me” pin. Yet he was more than happy to collaborate in the treading upon of a fellow human being. This is a poignant example of the inherent philosophical contradictions of Tea Partiers and right libertarians. They advocate against government because it’s violent or because the other party is in control. But they often turn around and support other kinds of violence or even government violence when their candidates are in power. For more on this, see my article about how the Tea Party could bring fascism to America.

Sadly I expect we will witness more red team vs blue team violence in the coming years. Or, as some call it, slave on slave violence. Who is served by altercations like this? What does it distract from? Our lives, liberties and properties are being dismantled by the state without reference to political affiliation while we are busy fighting over which dictator to put into office. What a crying shame.

Here is some more video of the attack from other perspectives. EDIT: Oops, that first one got deleted! It was the best one, too.

18 replies on “The Kentucky Head Stomp Was Plain Wrong”

This is a poignant example of the inherent philosophical contradictions of Tea Partiers and right libertarians. They advocate against government because it’s violent or because the other party is in control. But they often turn around and support other kinds of violence or even government violence when their candidates are in power.

Isn’t (part of) that contradictory? You can’t be libertarian, left, right or otherwise, and support violence as you mention. Only consequentialist libertarians can advocate any amount of violence and still be “libertarian” in the broad sense. A “libertarian” who “support other kinds of violence or even government violence when their candidates are in power” are not by definition libertarian and it only further confuses things to allow those individuals to use the word in that way unchallenged.

Great point, Bile. Thanks for commenting. I agree. Unfortunately, libertarian has become synonymous with “far right-wing” for some on the left – and even some on the right who don’t seem to understand what libertarianism is about, as you allude to. It seems to be a continuation of this Republican trend of being statists when in control and talking like libertarians when they’re not precisely so they can get back into control.

Isn’t this him? ID’d by another commenter on another website (sorry, too many tabs open)

Good find. There’s a resemblance but it’s hard to say for sure. Crowd-sourced justice at work. :D

Thanks for speaking the truth so clearly George. What these imbeciles have done is more damaging to their “movement” than anything that Rand has said. Becoming more aware of the contradictions between the “peacefulness” of right libertarians (like Ron Paul) and the aggressiveness of statists (like Ron Paul & the rest of the Tea Party) is a big part of what caused me to get off the minarchist bandwagon.

By the way, I love the new theme! Did you purchase from Pagelines directly or did you hire a designer?

Thanks for commenting, Ken. :) How right you are. I suspect you meant to say “like *Rand* Paul & the rest of the Tea Party”?

I purchased direct and did the technical work myself. I was self-employed as a professional BSD/Linux systems administrator and support technician for almost a decade so I’ve got a background in the technical side of this stuff.

No, I didn’t make typo. I would incude Rand Paul and Ron Paul in that group. It’s no secret that Ron Paul is willing to support much more statism as long as it is enforced at the “local level”…that was why he could get along with parts of the religious right, including the Constitution Party. In my mind I have come to see statism itself as aggression. Even if someone’s ideal state is very small, it is necessarily supported by violence and coercion.

In this post you correctly put the focus on the fact that even by their own standards the Rand Paul supporters in the video are ethically out-of-line. By any good measure they are not acting as “libertarians” in this instance.

Ok, maybe I’m just cynical, but that looked totally fake.
Maybe I just have a stronger personality, but I would’ve been fighting the hell back and screaming at people. Plus it looked more like he stepped on her shoulder (could’ve been the neck) not her head. She looked way too calm in that post incident interview.

Yes, there are fanatics out there from both sides who probably have violent extreme responses. However, to me this just looked like an attempt to discredit Rand Paul supporters, which is a damn shame. Politicians & their supporters generally do enough to discredit themselves.

It might be staged. But principled people should condemn the violence anyway.

“Valle appears to smirk in her post-stomp interview. It’s hard to believe someone could be that calm after a head-stomping.”

First, I want to preface this by saying I’m not a medical professional and everything I’m going to say is drawing from my own experiences.

With that being said… I’ve been a couple car accidents and had minor concussions. I don’t know if it was the adrenaline or what, but I was able to pull it together enough to focus, make sure my friends were okay, make sure no one is hassling the paramedics as they’re trying to treat us, etc., and didn’t fall apart until I got to the hospital. (Which was really weird in one incident, because I hit the hospital doors and suddenly was confused, felt drunk, was slurring, etc.)

I’ve also been assaulted by former partners and if you spoke to me directly afterwards, I’ve got so much adrenaline pumping through me that I’ve laughed the assaults off….even though they were wrong, not provoked by me (and even if they were, there’s no excuse for beating someone you “love”). Again, it wasn’t until a half hour later that everything hit me and I had a meltdown.

I’m not trying to provide proof of anything here – let’s face it, anecdotal “evidence” is worthless – just giving a little bit of insight.

Great insight drunkenatheist. That’s a really great point you’ve made. Thanks for commenting.

Does it change your mind now that we know that the guy is a Rand Paul county coordinator and was just thanked by Paul in a newspaper ad? Does it matter that they have a long history of working for Paul? Or are you still going to to deflect the blame and declare it not so bad?

It should. The likelihood that it was staged is negligible at this point. I have to say, I’m disappointed in the Tea Partiers for failing to condemn the violence strenuously and unequivocally. It’s another piece of evidence that they’re still stuck in the partisan game. What’s got to happen for them to move out of partisan mode and into principled mode?

Thanks for commenting, Matt.

Even if it was staged, it was no excuse for full grown men to stomp on a woman. I have no use for radical environmentalists but Im not going to beat one of them up for the hell of it. Any principled Libertarian should only act aggressively in self defense, nothing has been brought out that the woman was threatening anyone or targeting Paul. These so called men should be ashamed of themselves.