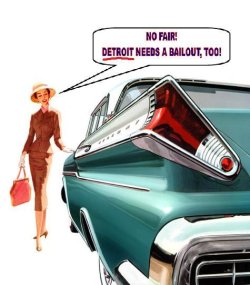 Obama is desperate to bailout General Motors and even says the bank bailout bill that passed recently amid great controversy gives the President the discretion to do so. Is this change?

Obama has been far more receptive than Bush to having the government intervene to rescue another major sector of the economy. He called automakers “the backbone of American manufacturing” in his first post-election press conference last Friday, and many thousands of their employees belong to unions that are part of the Democratic Party’s base.

Change is no more Bailouts

No! This is just more of the same. Change would be to refuse any more bailouts of private businesses. I thought Obama wanted to “spread the wealth” around a little more evenly? I suppose not, because a bailout is either citizens’ dollars or new dollars (i.e. citizens’ dollars) being sent to the owners of big business. How is that change? How is that “spreading the wealth”?

If I had supported Obama, I would feel cheated right now. But, if after seeing him capitulate on FISA and telecom immunity, you still supported him, then you needed a strong dose of caffeine anyway.

Obama has called on the Bush administration to accelerate $25 billion in U.S. government loans provided by a recent law specifically to help automakers retool. Late in his campaign, Obama proposed doubling that to $50 billion. But industry supporters say the automakers, squeezed both by the unavailability of credit and depressed sales, need unrestricted cash now, simply to meet payroll and other expenses.

On Friday, Obama said he would instruct his economic team, once he chooses it, to devise a long-range plan for helping the auto industry recover in a way that is part of an energy and environmental policy to reduce reliance on foreign oil and address climate change.

It’s not enough that the automakers get $50 billion to “retool” but they also need a general handout? Just so they can produce electric vehicles like the Volt, which don’t even work, as you can see in the 43-second video below.

Obama wants to Sell you this Lemon

Obama wants you to subsidize a car that can’t even climb a slight incline. This reminds me of the ongoing biofuels incentives fiasco, which is driving up prices for food commodities like barley, corn and meats. Each is just another example of government appropriating our money to screw up the inherent regulation in free markets. The only result can be disaster.

How is GM our Business?

I don’t hold stock in GM, so why is my money being loaned or granted to them? Why is my currency being debased to help them? What business is it of a republic what happens to a private business as a result of its own negligence?

Have you asked yourself why the government is even involved in this? If people want electric cars and are willing to pay for them, why do we need to government to get involved?

In Fact, Bankruptcy is just what GM Needs

Over at The Baseline Scenario, James Kwak argues that bankruptcy might be just what GM needs.

Tell your Congressman: No more Bailouts!

Join Downsize DC and send a message to your elected representatives: No More Bailouts! It only takes a minute.