Liberty on Tour strikes again. Voices like these are hard to find in the din of mainstream media. Kudos to Adam Mueller and Pete Eyre for shining a light on these courageous activists. This is not Tea Party astroturfing! This is genuine grassroots activism. These are real people with real motivations. Not angry vacuous middle class patriots. 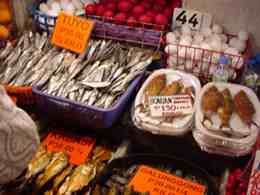 Pete’s turn at the megaphone was great. But his vocabulary was less than optimal for that context. The words are too abstract. The Goldwater quote and the word ‘market’ are associated with right-wing upper-class republicanism. Most urgently, we need a synonym for ‘market’ that communicates the liberty and equality of voluntary relationships without connotations of corporatism and state capitalist oppression. In other words, how do we present our message in a way that resonates with main street (or hippie street) but doesn’t sound like corporate astroturfing?

‘Community’ is one important word we must squeeze into our vocabularies. Contrasting the disadvantages of central planning with the benefits of local autonomy – that’s something new. It just makes sense to people. It’s sound, too, because at the local level it is easier to hold errant individuals and institutions accountable. When institutions are small, it’s easier to put them out of business. It’s easier to compete with them. The individual is left with more control over her own destiny.

Another critical concept is ‘mutual.’ ‘Mutual’ is analogous to ‘reciprocal’. It implies balance. The imbalance of power caused by state central planning and state-supported corporations is a central, if little-known, issue of our time. Further, reciprocity can be linked to an international golden rule. That is: “Do unto others as you would have them do unto you”. It’s also called the ethic of reciprocity. It may be the very foundation of human rights. 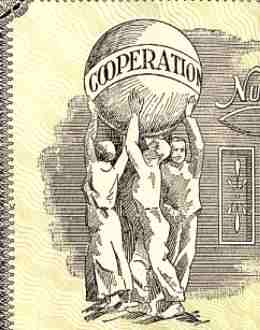 Better than the Atlas Shrugged meme.

Don’t talk about privatization. That concept is polluted. It suggests the turning over of vital services to unaccountable corporations. Talk about mutualization instead. Mutualization refers to the process of converting a corporation (or government agency) into a customer-owned cooperative (“mutual”). Instead of privatizing government, potentially to deep-pocketed corporations that owe their “success” to association with the state, doesn’t ownership really belong to those who have been paying the bills? Those who have suffered at its hands? Those who homestead these properties every day?

Mutualized government agencies can be returned to those people affected by them. Here they can be held accountable. These mutuals will serve the needs of their customers, or cease to exist. This is a better paradigm than privatization. The use of a new, and more accurate, term has the potential to catalyze thought and stimulate new questions. This kind of intellectual effort must dominate our first steps toward liberty.

Thanks for the feedback George. I agree that I could have framed it better. Adam and I were actually talking yesterday about abstaining from using the term “privatize” when discussing this issue, especially with those who may have a negative knee-jerk reaction to such terms.

That said, my speech was spur of the moment – I literally asked if there was still room to speak and was handed the megaphone a minute later (the organizer said because I was on the spot and he didn’t want to have to track down those next on the list).

Also, public speaking is an area in which I still believe I have ample room to improve. It’s because of that and because I value the constructive feedback of friends like yourself that I appreciate this post.

Your thoughts here seem to complement the treatment of markets by Derek Ryan Strong:
http://creatingmutualism.blogspot.com/2010/08/markets-anarchism-and-rhetoric-or-why-i.html

I personally view markets as representing one out of many manifesting variations of human economic behavior, and that none of these variations should be unduly emphasized to the detriment of others. Most people view markets very narrowly (cash nexus, quid pro quo), and won’t be very receptive to constant appeals to the glories of markets if that translate, in their minds, to a world where everyone and everything winds up commodified (corporatist style), with little to no room or tolerance for alternatives.

I definitely prefer appealing to notions of reciprocity and mutualization over the typical libertarian appeals, for reasons you’ve mentioned here. Commons also represent an alternative to privatization, as Elinor Ostrom’s work illustrates. Little irks the minds of many leftists more than the idea of natural resources simply being sold, by the state, to politically-connected corporate plutocrats.

Marx is calling and he wants his rhetoric back. Ah just teas’n but that screams typical pinko exploitation theory.

I suppose these semantic choices are very appropriate depending on who you’re talking to. To me, I know exactly what an ideal market and private ownership means, to someone coming from more of a lefty perspective, they are loaded with bad vibes as you suggest, and using these synonyms might be a good alternative line of explanation. As for economic orders, as long as they are freely chose by, uh, a market, that’s just fine with me. Giant mega structures? Fine. Tiny everywhere (not likely), but fine. Individual ownership? Fine. Collective ownership? Fine.

George, realized I neglected to mention in my comment above that during my speech I attributed the quote both to Goldwater and Malcolm X.

Thanks for your comments, guys. Keep up the spectacular work Pete! You’re on the leading edge of liberty activism. PLUS you gracefully allow me to critique your work. :D

I’d say just the opposite. Without state-backed capital greasing the wheels and a regulatory system that places proportionately higher burdens on smaller entities, the mega firms would fall under their own inefficiency. As people see the opportunities afforded them in a freed market, they’d leave Megalo Inc. in droves. This is not to say that larger firms won’t exist, but I highly doubt we’d see anything along the lines of a GE, Walmart, or Monsanto in the agora.

Disclaimer: I work for a Fortune 100 company (and have for some 15 years). I know from first-hand frontline experience that such enterprises only exist because they’re propped up by the state.

One word that is equally important, and which I believe propertarian liberty-lovers are trying to communicate, is “individualism”. “Community” and “cooperate” are words already used by the rhetorical wizards of the State, and for the average propertarian, they are as diluted and uninviting as “markets” and “privatization” are to people coming from the left. The word “cooperate” is what many public school teachers used to force kids to get along, to “cooperate”, when used in a sense to impose a duty or obligation on someone, is really detrimental.

I agree with everything you have said, but only wish to help articulate what I believe propertarians appreciate about privacy and ownership — responsibility and respect for the individual.

I don’t think a society can be peaceful without respect for the individual, though I don’t think an individual can reach his or her potential without remaining open minded and participating productively with others in society. A body of ideas that respects the individual and promotes the well being of society is an integrated philosophy that is life-centered. Starting with oneself and extending out into this individuals relationships with others, liberty is possible. It is always preferable for cooperation to be chosen.

Yet it is unusual to hear libertarians talk of cooperation and community. That’s where the thought-inciting power comes in. :D

Yes! Beautiful. I feel the same way. This is how I speak, and this how I wish libertarians spoke. Thank you George for spreading this.