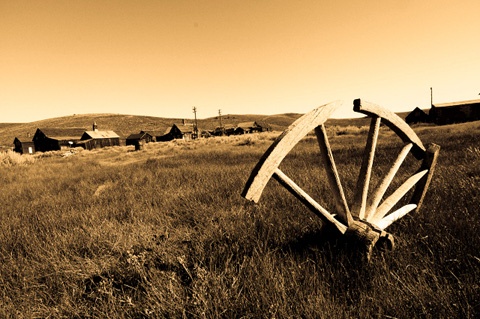 Over at C4SS’ Stateless U in ATP 102, I read and critiqued “An American Experiment in Anarcho-Capitalism: The Not So Wild, Wild West. [PDF]”

Does America’s Wild West of the 19th century evidence elements of a successful anarcho-capitalist society? Is it possible to demonstrate the effectiveness of market-provided security services by applying anarcho-capitalist theory to a historical context? These are the questions posed by Anderson and Hill in “An American Experiment in Anarcho-Capitalism: The Not So Wild, Wild West.” Although their analysis turns up several examples of free market dispute resolution and security service, their argument is generally weak. One example, that of the mining camps, stands out as clearly anarcho-capitalistic. Two others are better described as nascent limited governments.

The authors apply David Friedman’s 6 hypotheses of how an anarcho-capitalist society should work, which are: (1) that property rights will be protected; (2) that private security agencies will preserve orderly society; (3) that private protection agencies will abstain from warfare; (4) that different rules will be chosen by different societies; (5) that major crime organizations will not dominate society; and (6) that competition among private defense agencies will keep them from committing aggression against their customers. In light of the constitutionalist – anarcho-capitalist debate, the authors rightly note that If one defense agency in a given context wipes out the others and takes over as a de facto (constitutional) government, it would discredit the anarcho-capitalist argument.

But is this really an anarcho-capitalist millieu? The authors argue that while federal government agencies existed, they were absent enough, or their legitimacy was called into sufficient question, that study of societal organization in an anarcho-capitalistic light is appropriate. However, the fact remains that a government was in existence and did influence behavior, be it by action or just the threat of it. It was at best a partial anarchic environment.

The importance of Schelling points – the common point of departure for the western settlers of respect for property rights – detracts from their analysis. Would such peaceful co-existence have been possible if Indians and blacks were mixed into these communities in significant numbers? It does not seem likely given that some of the cited societies were at war with Indians precisely due to Schelling point conflicts.

As settlers moved into lands outside the formal domain of the federal government, they came under threat from speculators who with political pull might be able to gain government title for the land the settlers themselves had actually worked, lived on and improved. So they banded together in land clubs, which included courts, officers, dues and the use of ostracism as a punishment. In at least one case, the club’s constitution provided for arbitration of property claim disputes.

While the land clubs appear to have varied in their rules and procedures in accordance with Friedman’s fourth hypothesis and protected property rights as described in his first, it’s not clear that there was competition among clubs in the same geographical area. Were these clubs simply a form of organic limited constitutional government? This line of thought is more convincing given that the clubs had constitutions and officers, a rather hierarchical arrangement.

In the authors’ look at cattlemens’ association, we clearly see competing private defense agencies that arose when the state failed to competently exercise its police powers. But they issued summary justice, without due process, which does not qualify as being respectful of property rights. The authors find no evidence that hired guns joined together to commit aggression on a significant scale, which supports Friedman’s sixth hypothesis and works against the constitutionalist rebuttal to anarcho-capitalism that defense agencies will unite to become a de facto government.

The mining camps are the best example of anarcho-capitalist organization described in the article. Groups organized through contracts and did not always have geographic exclusivity. In Colorado there is evidence of competition among people’s courts. In 1860, four governments were in simultaneous operation with customers, documents and cases passing freely amongst them. The mining camps comply with all six of Friedman’s hypotheses. They even banned lawyers!

Wagon trains created their own constitutions and enforcement mechanisms, sometimes even before departure. They wrote constitutions, promulgated rules, elected officers and held jury trials. Was this really anarcho-capitalism though? Or just the genesis of new local, possibly temporary, governments that held implicit allegiance to the federal state?

The wagon trains may also be a case of people bringing along their old local governments in new forms. In accordance with Friedman’s fourth hypothesis, they chose different rules and organization forms. Some mixed their contributed property together in a collective organization, others retained personal ownership of their contributed goods. The authors claim that the wagon trains produced justice and protection without a monopoly on coercion, but were there actually any competitors? There is no discussion of this important point.

Mining camps appear to be the only serious contender for the title of anarcho-capitalist society. While cattlemens’ associations employed private defense agencies, they carried out punishment without any kind of due process and demonstrate little else in the way of qualifications. Land clubs and wagon trains could just as easily be infant local limited constitutional governments, even if they do appear to have explicit consent from their governed. Many of these organizations would not have been feasible without their members’ shared respect for property rights.

3 replies on “Was the Wild West an Anarcho-Capitalistic Society?”

I think the question of whether each was an infant government depends on an examination of where it ultimately ended up. Did it die? Was it replaced freely and voluntarily by another organization in favor? Did it seize political power for itself? Did it align itself with another political power?

The big problem in the west is that for the most part these organizations were seen as substitutes for government rather than replacements for them. When something “better” came along in the Federal Gang, even though by objective measure it obviously wasn’t better even to them, they chose it and abandoned the working systems they had established. It does however illustrate that without government influence the free market naturally operates to provide “government” services. It is an example of what we can hope to start with, and with principle and intent on our side, preserve.

It’s been a little while since I read An American Experiment in Anarcho-Capitalism, but to me the value of the work was not in showing that anarcho-capitalism existed, but in giving historical examples of how disputes have been worked out without government even in the absence of widespread anarchist values. Certainly the Western frontier wasn’t a good example of anarchy in practice – the whole area was opened up by federal government expansion and widespread destruction of native property rights, and the interests of land speculators, railroad companies, and mining companies were backed by government force. But within the history you can find clues as to how an explicitly anarchist society might work, as well as examples of when having little or no direct government control over an area didn’t lead to chaos.