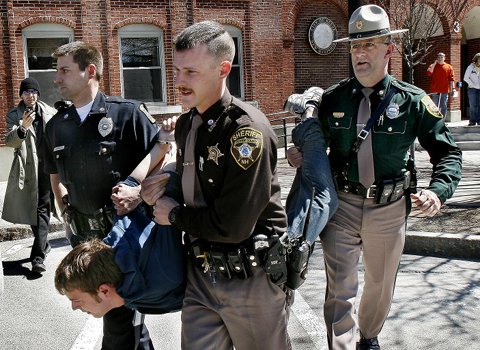 A friend of mine who recently turned on to liberty and the voluntary society wrote to ask me about the “Not-So-Disorderly Seven” that were arrested or given summons yesterday at Keene NH district court. The Keeniacs have so much going on that his confusion is understandable!

Can you give a little background on where this whole Keene NH thing got started? I mean before Sam got arrested for taping at the courthouse during Dave’s (?) arraignment for taping in the courthouse… Because frankly, someone getting arrested for videotaping, in this context, doesn’t seem that juicy to me. Or is that really the whole story?

Oh! Is this about the people whose homes are being seized by Keene for nonpayment of taxes?

No, this is unrelated to the Keene city council house seizures.

Keene district court has a history of barring videotaping of the proceedings. Other courts, such as Milford’s, allow it.

For awhile now they have been going to court and being turned away for trying to enter with video cameras.

Dave Ridley, who produces a lot of video on liberty activism in NH but seems rather moderate politically, got fed up with the Keene ban apparently and disobeyed the order on purpose. This was a few weeks ago.

His arraignment was yesterday and Sam, who seems to focus on doing fewer and longer video productions than Dave, disobeyed the order on his way into the arraignment claiming that because the order not to videotape was not signed, it was not valid.

That’s about the whole story regarding this incident as far as I know.

If you have any questions about the goings on in Keene, NH, feel free to ask in the comments. I’ve been following the news from a distance for several months.