I like Facebook. It’s created enormous value for me. I keep in contact with several hundred fellow liberty lovers there – folks who have become my friends. We have fun and trade ideas. We collaborate to achieve goals of importance to each other. It costs me nothing to participate yet the value I receive in return is priceless. And that’s exactly why I’m creating an alternative to Facebook.

Do I contradict myself? No. Facebook is a hierarchical system controlled by a state-chartered corporation. They’ve already deleted my account once. Since then I’ve had two close calls. Facebook is willing and able to separate me from my network at any time (by deleting my account) – a devastating loss. In fact, they do it all the time, so much so that liberty lovers started a group to publicize the new accounts of fallen comrades.

Libertarian activists are out there on the edge, testing the limits of what can be done to advance liberty and justice. Our networks are our defensive shield from state persecution. Without them, the risk is too great. As Ben Franklin said after signing the Declaration of Independence, “We must, indeed, all hang together, or assuredly we shall all hang separately.”

Here are my reasons for creating an alternative to Facebook. 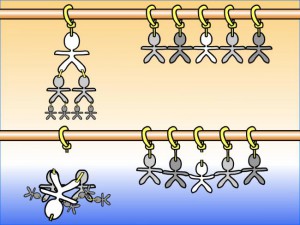 The distributed system is more resilient.

I’m still keeping my Facebook account, but I’m also diversifying my risk. The social network I’m creating won’t need 500 million users to be a success. I’d be happy with 500 active users within a year. Would you like to be one of the first? Agr.io is still at an alpha stage but if you’d like to shape its future direction, let me know. I’ll send you an invite. (I’ll need your email address.)

Another great article George. One invite for me, please.

Definitally- Facebook is getting less and less predictible. It is starting to limit the connectivity of your sharing of stories- not all your freinds see your posts in real time anymore.

Let us also not forget Twitter too. Let us use them all so it isnt as simple as taking one network down.

The first 6 invites sent. Once you register you too can send out invites. Please let me know of any problems you encounter.

I’d like to help you grow it George. Hope it becomes all that you dream of.
<3

Thanks Lydia! I sent you an invite. Pls let me know if you don’t get it.

George, you have all good reasons for using an alternative to Facebook. It is for these same reasons I tell people to download and locally store important data. We definitely need a away of restoring basic truths if the internet becomes more censored than it already is. Please send an invite my way.
Paul Turner

Just sent your invites, thanks Darren and Paul.

Todd, invite on the way. Thanks!

Me too!
Saw you first on FK George, admiring the work ever since then.

OK, I’m game. Facebook just nixed my account because it “wasn’t under a real name.” Screw them. :) Can I get an invite? I’ll promote this on my site if you want and will probably make it my FB replacement.

I’d love to get an invite, too…

Invites for you guys on the way. :)

please send me an invite, thanks :)

I was wondering, George, if you would have your own ban-list?

Robert, do you mean can you block people on agr.io? Yes, you can.

Never mind, I re-read it and realized it was a dumb question. I meant in the same way FB bans people.

Sure I might ban people but it would have to be for something really, really severe. And even if I did you can get your own instance of statusnet from status.net for free or self-host and reconnect with everyone.