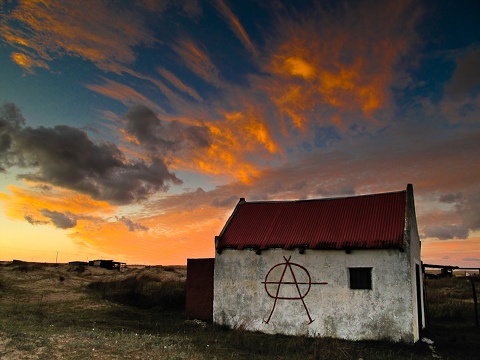 Over at C4SS’ Stateless U in ATP 102, I read and critiqued “Do We Ever Really Get Out of Anarchy? [PDF]”

In “Do We Ever Really Get Out of Anarchy?”, Alfred G. Cuzan argues that society is always in anarchy, and we don’t escape it just because a government is declared to be in existence. Government is simply a kind of feudalism that gives anarchic liberty to some but not to others. It is better described as political anarchy, he argues. While government’s subjects – those not in its employ – must go through government in order to trade or resolve disputes with their fellow man, government participants don’t. As such they are in a state of anarchy in relation to one another. They settle disputes among themselves, without reference to any third party. Anarchy is effectively reserved for one class of people, and denied to another under political anarchy.

Cuzan argues that the only meaningful debate is about what kind of anarchy we shall select, political (with a government) or natural (without). If the former, is a plural (decentralized) or hierarchical (centralized) structure better? His approach is very utilitarian. There is no focus on morality or on reasoning from first principles. He simply examines the basic question of which system results in less societal violence, a question given central importance because government advocates claim that government’s existence reduces societal violence.

When a subject is brought to court, he is judged by members of the anarchic group, the state employees. His justice, or lack thereof, is rendered by a third party. But when a government employee is brought up on charges, it amounts to vigilante justice, Cuzan argues, because members of the third party are judging one of their own. This is a challenging claim, one that is hard to swallow at first. One might argue that government employees are also subjects and would be judged by the third party. However, these individuals at the same time are part of the third party. The same can not be said of subjects. This is the critical difference.

Cuzan examines whether political anarchy is good for society, judging by the amount of violence that results under it. Does it result in less violence than natural anarchy? It should, if government advocates are to be proven correct. His argument gets weak and rather subjective here. While I am convinced that examples like Hitler and Stalin’s murderous excesses can not be matched by any violence present under natural anarchy, he cites no empirical evidence and, in the end, appeals to probability.

Cuzan establishes a standard by which to judge the violence levels of different political anarchist regimes – are they pluralistic or hierarchical? The former disperse power among multiple agencies, the latter centralize power, in the extreme case to the point of monarchy or dictatorship. The more hierarchical a government, the more often decisions get routed through a lone third party. The more pluralistic, the more often different decisions are made by different government agencies. Hierarchical government, due to its reliance on fewer people to make decisions, is prone to make bad decisions, which lead to resistance and subsequent crackdown. Pluralistic government, on the other hand, allows for the possibility of competition in decision-making. One agency will have the ability to overrule the bad decisions of another, thus leading to less potential for resistance, and subsequent government violence.

Cuzan’s essay, while short and partially based on conjecture and probability, is compelling in its arguments that (1) even under government, we are still in a state of anarchy and (2) that pluralistic government will tend to result in less violence than hierarchical government. Cuzan’s argument that natural anarchy will be less violent than political anarchy falls short by lack of examination of empirical evidence. His utilitarian starting point and hypotheses are thought-provoking and insightful.

2 replies on “Do We Ever Really Get Out of Anarchy?”

“Cuzan’s argument that natural anarchy will be less violent than
political anarchy falls short by lack of examination of empirical
evidence.”