Libertarian activists Pete Eyre and Adam Mueller are in Cheshire county jail in Keene, New Hampshire right now. Pete was attacked in an unused courtroom by a new and ornery bailiff over a hat on Monday, January 24th. He is exercising his right to remain silent. He is not assisting the local thugs in their attempt to make his caging look just and correct. He is in segregation 23 hours per day. During Pete’s arraignment on Tuesday, January 25th, Adam stood up and spoke the truth to Edward Burke, a Keene district court judge, about his kangaroo court. Adam was arrested and insta-sentenced to 60 days in jail. Both are now on a hunger strike.

Pete lived the truth. No man is greater than another. Ritualistic displays of subservience, such as the doffing of hats, are not compatible with this truth. Pete not only knows this truth, he also lives it. And that makes him great. Adam spoke the truth. He couldn’t bear to witness the miscarriage of justice that was Pete’s arraignment. The decision to release Pete is in the hands of his captors. To argue otherwise is to pretend his captors act with legitimate authority, a sad unsubstantiated joke. Compare them with those famous three monkeys who shield themselves from the truth by covering their eyes, ears and mouths to the truth. 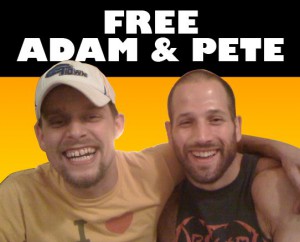 Here’s what we can do to help free them right now.

BONUS: #12. Watch Meg’s video above and follow up on her suggestions.

Please keep an eye out for new developments and calls to action. We have got each other’s backs. Together we are powerful.

hey the phone number on to the police station is missing a number.

I just called the PD and that extention does not work.
I then called the jail, and that as he was no longer being held there, I should direct my call elsewhere.

Thanks. We’re going to do a media blitz on Monday. Kindly stay tuned. :)

Another thing people can do is help expand Pete Eyre’s wikipedia page:

I made some minor improvements, but I don’t know much about his background and would appreciate if others could work on it.