Handcuffed, dragged away through ice and snow and imprisoned just for wearing a hat? That’s a joke. That’s not possible. No cop is that foolish. But it is true. Pete Eyre was caged yesterday in Keene, New Hampshire for that very offense. Is it illegal to wear a hat in court? Tell that to the cop who wore his hat after Pete was arrested – and while court was actually in session. (See the photo below). Say what you will, but people who peacefully wear hats do not deserve the abuse meted out to Pete as seen in the above video. 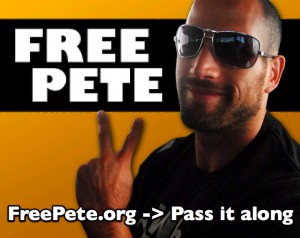 According to eyewitness Ethan Lee Vita, “The day started out very cold, at -22 Fahrenheit, and was probably about -15 when we got to court. The court is poorly heated and while it was not that cold, it was still quite chilly. Pete is a nearly bald man without much hair to warm his head. As such, he was wearing a hat that said, ‘Don’t Tread On Me’. A few minutes after he sat down, and without the judge in the room yet, a bailiff began demanding he remove his hat. His reply was simple, ‘but then I’ll be cold’, repeating it.”

The video picks up here. The bailiff told him to take his hat off or leave. Pete told him he hadn’t agreed to any policy about hats. The courtroom is public property – supposedly owned by all – so why should he be bound by some alleged policy? Keene police sergeant and town prosecutor James Cemorelis snatched him out of his chair. Two other thugs joined him, one putting his knee on Pete’s head. But Pete wasn’t resisting.

Pete is dragged off down the hallway, though ice and snow to a waiting police car. Why isn’t he cooperating with the cops? Why should he? He has done nothing wrong. Why should he make it appear that the opposite is true? James Cemorelis and friends are in the wrong. 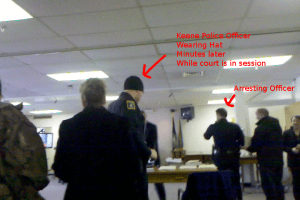 A call flood is being organized for today starting at 8AM EST. This is where members of the community contact those responsible for abuses and politely register their disapproval. I urge you to participate. You can find more information here: Facebook > Call Flood for Pete Eyre. What should you say? Watch the above video. You will think of something. Just remember to keep it polite and constructive. Fill silences with statements of truth but let the other person talk, too. Record your call and share it with the community, if you feel legally comfortable doing that. (New Hampshire is a two-party consent state, so be careful.)

Pete is a solid individual. I’ve previously covered his work here, here and here (and more). He didn’t ask for this. He didn’t do anything wrong.

For more information, visit FreePete.org, CopBlock.org/FreePete and Facebook.com/FreePeteEyre. We will not rest until Pete is free from a cage again.

Please share the above video with the people in your network. It’s a decent intro to Pete and the attack on him. If there’s a better one out there, please let me know.