When will the Free State Project (FSP) reach its goal of signing up 20,000 people to move to New Hampshire? That’s the question tens of thousands have been asking for the last 14 years.

That day will arrive sometime in late 2016. That’s the conclusion I reached after researching some FSP history, crunching a few key numbers and applying my admittedly unproven powers of clairvoyance.

The Free State Project is an agreement among 20,000 libertarians to move to New Hampshire within 5 years of the signup goal being reached. The ultimate aims of the FSP once those numbers are attained remain vague at best, but the numbers are clear.

An Initial Boom of Activity

The FSP first started reporting participant numbers in 2002 and, by the end of August of that year, nearly 1,000 had signed up.

It leapfrogged ahead with a dizzying 406% rate of growth in 2003 – an achievement that casts a long shadow. 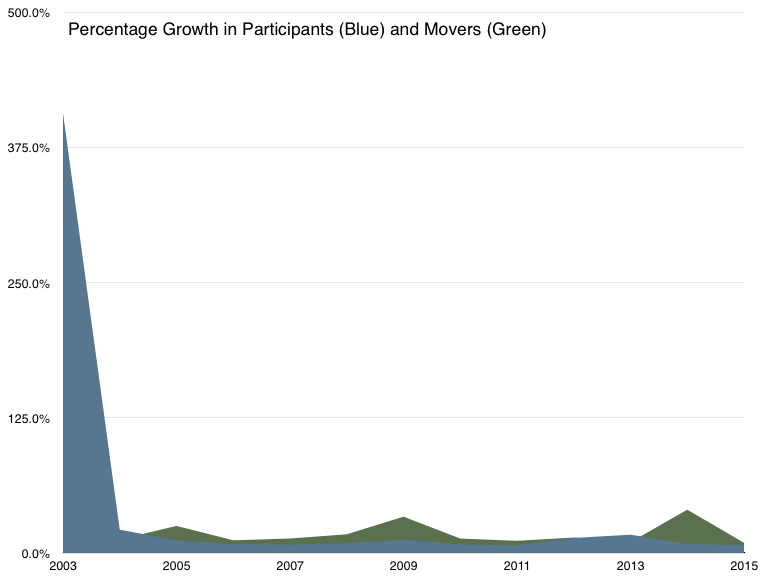 Since then, the rate of new signups has been lackluster if steady with an average of 11% annually and a median of 8.6%. Today, the organization boasts a little more than 17,000 participants. 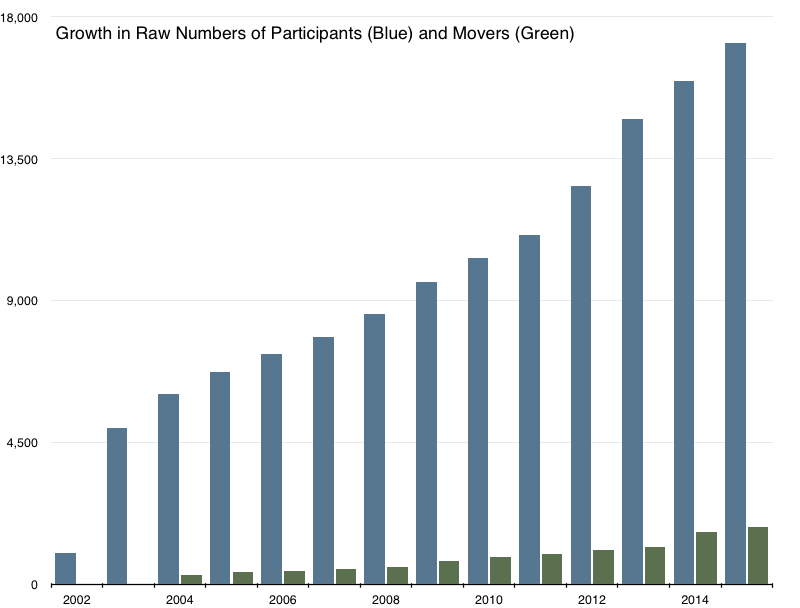 Given a projected growth rate of 14% over the next year, which is the same rate the FSP experienced in the last presidential election year of 2012, it will reach the triggering number of 20,000 signups by late October of 2016, just a little over a year from now.

It will have taken them 15 long years, far past the originally anticipated date.

During this long interregnum, some 1,806 early movers have already taken up residence in New Hampshire. They’ve been running for office, starting farms and drinking craft beer by the butt load, according to FSP sources.

Now that the signup goal is within sight, what about the ultimate objective of actually moving those pledged 20,000 libertarians into New Hampshire?

In the statement of intent, FSP participants promise to move to NH within 5 years of the 20,000 signup goal being reached. But is it reasonable to expect everyone to swarm into the state in such a short period of time? Let’s look at historical rates of moving for FSP participants to get a sense of perspective. 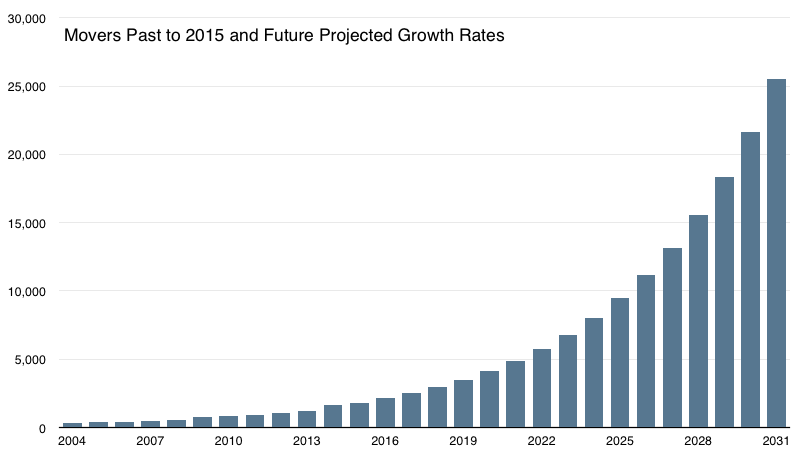 A Trickle within a Flood

Let’s do a quick reality check. How many people, besides FSP participants, are moving to New Hampshire every year?

That means that a year ago, NH was growing by 5,700 new, non-FSP people per year. But with a growth rate of 18% per year in new movers, the FSP won’t even match this raw number of new annual movers until 2033, when it will have an added an estimated 5,420 new movers that year alone.

So we can expect that, in 2033, the FSP could reach parity in terms of non-FSP population growth with NH’s 2014 numbers. This does not look promising.

Let’s look at the numbers over a longer range. WMUR reports that historically, on the low end, NH will add 80,000 new residents per decade.

The NH government more conservatively projects that between 2010 and 2030, the NH population will grow by 94,000. Even if 20,000 of those are FSP-related movers, they will be outnumbered 3.7 to 1 by non-FSP-related movers (or new natives), most of whom will likely be from one of the most government-welcoming states in the union: Massachusetts.

Consider, too, that the old Yankee-value stock of New Hampshirites – the ones who made NH a libertarian-friendly state 15 years ago – are graying and dying off.

It’s also quite unlikely that the FSP can sustain an 18% growth rate in new movers indefinitely, since the number of libertarians in the United States is highly limited.

On a side note, FSP partisans will tell you that they never planned to be anything more than a noisy minority in New Hampshire. Twenty thousand is all they need to make a stink and move hearts and minds, to prove that things can be done and perhaps even turn New Hampshire into the Switzerland of the Americas. I consider this pollyanna thinking at best, outright deception at worst, given that the primary strategy of FSP participants is voting.

A significant, but ultimately unknown, number of FSP early movers, including a number of especially active ones, have left NH since moving. My numbers above don’t take attrition rates into account but even if 25% are lost to attrition, it will only require an additional year (2031 instead of 2030) of 18% annual mover growth to make up for the deficit.

Some early movers likely have not reported their move to the FSP and so the real numbers of early movers may be slightly higher than reported. 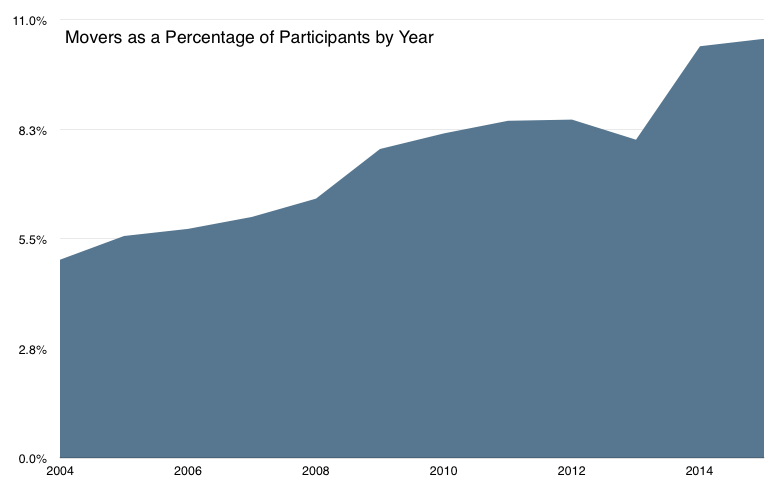 Some other noteworthy tidbits of information I came across in my research include the following:

If you’d like to see the Numbers spreadsheet I used for this, just email [email protected] with “FSP Spreadsheet” in the subject line.