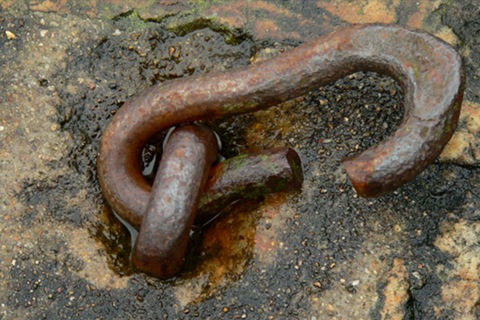 In the Albany Times Union, columnist Mark Dalton argues that libertarian control of the government would result in chaos. As right-wing libertarians rolled back state regulation agencies, no one would be left to protect the consumer. Individuals’ only recourse would be to sue. Sue they would, resulting in overflowing courts. Although Dalton doesn’t mention it, right-wing libertarian rule would almost certainly deny the funding required to attend to this litigation explosion. Court costs would rise. Wait times would explode. Meanwhile, ne’er-do-well state-chartered corporations would produce toxic baby food without a care in the world.

Alright I’ll admit it, Dalton overdid it with the toxic baby food. But he has a point. There is an inherent logic inside the state. Everything runs by force. Violence pays the bills, violence keeps everyone in line. Violence maintains the hierarchy. It keeps everyone waiting for orders and executing them faithfully. It keeps the employees firmly tied to the party line. No thinking for yourself is allowed! It’s like the Soviet Union before perestroika. Everyone was afraid to stray from the party line.

Now inject just a teaspoon of liberty into that, and the whole thing breaks. Isn’t that what happened to the Soviet Union after all? Gorbachev blinked. The credibility of state violence crumbled. All hell broke loose. While we’re under threat we’re doing relatively alright. And while we’re in this new free market, we might be a little better. But between the two, Dalton right points out the capacity for carnage and chaos.

This is why right libertarianism – the idea that we’re going to take over the state and roll it back to some minimum size – will not work. In fact, it could set the liberty movement back if it actually succeeds. Change must be organic. All change pushed down from the top inevitably crushes people at the bottom. This is also why the voluntaryist strategy of changing one mind at a time and the agorist strategy of building the new society in the shell of the old are so brilliant. They don’t require hierarchy. They are organic. There is no violence. Participation is optional.

Yet libertarian voting and running for office play an important role in the libertarian evolution. As Roderick Long has noted, libertarian politicians have the potential to turn a devastating state decision into a simply bad one. The state’s victims are suffering terribly right now. There are people in jail over victimless crimes. Cancer patients are being denied medical marijuana. Anonymous people in distant lands are being maimed, radiation-poisoned and murdered. The list goes on. Libertarian voters and politicians have the potential to ameliorate these atrocities.

There is a solution. Dalton overlooked it. With more freedom, consumers would have more disposable income and greater ability to hold market organizations accountable. Is the state court system clogged? Start a private arbitration service. (These already exist btw.) Don’t trust the baby food? Start a magazine to scientifically test products and let people know your results. (Heard of Consumer Reports?) Worried about salmonella? Only eat eggs that carry the endorsement of a testing operation. (Heard of ISO? UL?) With greater freedom and less government interference, individuals can work together to convert caveat emptor from a threat into a promise.

Great article. Many people have an opinion on Libertarianism without getting some basic facts. For examples of what Libertarians are doing worldwide, see:http://www.Libertarian-International.org