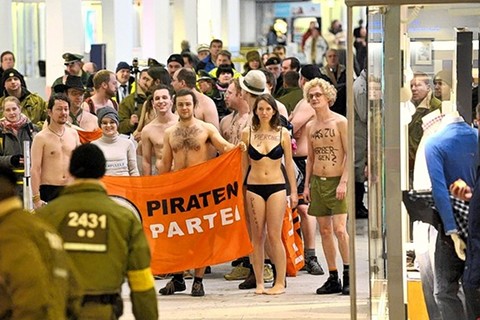 While researching the new backscatter X-ray naked-body scanning machines that the federal government is placing in airports around North America, I came across a commenter on NJ.com who claims the scanners infringe on his freedom. Is he right? Are the scanners being forced on travelers against their will? Can enterprising individuals offer a competing security service? Who is paying for these $170,000 scanners, and how?

Luckily, the government agency in charge of these things (the TSA) affords us the rare privilege (at least on paper) of opting out of this government program. You can choose an aggressive rub down instead! And that’s only reasonable, if less than ideal. Airlines will either provide security or go out of business. There are concerns about the full-body scanning machines: they can damage your body with excessive and unnecessary amounts of radiation and they put your privacy at risk. So I’m comparatively quite thrilled that my family only has to be groped in order to travel on an airplane.

The real problem is that government arrogates to itself a monopoly power over passenger security screening. This kind of authority is capricious and unaccountable. It’s simply not practical. There are few strong incentives for honest and fair behavior. If consumers want to purchase their airline security in a different, perhaps more dignified package, they are forcibly denied this option. It’s a one-size-fits-all solution. It’s not like you can go to a different airport and get better treatment. The government effectively owns all the major ones!

Who pays for these scanners? You do – if not through income taxes then through the inflation of your federal reserve note (US dollar) holdings by the Federal Reserve. That’s right, the federal government is running enormous deficits. They fund these shortfalls with debt, much of which is invented out of thin air by the wizards at the Federal Reserve. There’s no opting out of that!

The full body scanners are an infringement of travelers’ freedom. The government forces individuals to pay for them, whether they fly or not, whether they want them or not. The government claims as its unique privilege monopoly control of passenger security screening. Competing security firms are forcibly barred from competing with the TSA. Airline security is very important, but this is no way to go about it. We need the government to back off and let airlines, airports and travelers find their own solutions, without the use of force.