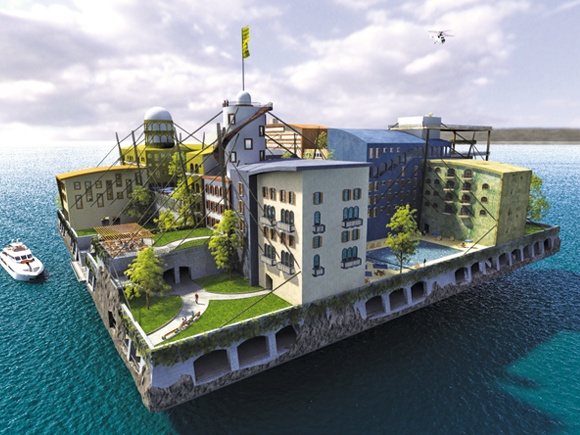 This Yahoo News article about PayPal founder Peter Thiel’s donation to the Seasteading Institute cracks me up. According to the writer, the libertarian project consists of “no welfare, looser building codes, no minimum wage, and few restrictions on weapons.” LOL.

In reality, libertarianism is about having legitimate authority, voluntary authority. Right now, the world is flooded with forced authority. Do what I say or you’re going to be thrown in a cage or have some of your money taken. Libertarianism, on the other hand, says: If you want to work with me or live in community with me, let’s follow these rules we both agreed to. If not, you’re free to find other people to work or commune with.

Libertarians are not explicitly against welfare, which is just a form of mutual aid. For libertarian anarchists, in fact, mutual aid is a highly valued concept. Libertarians, generally speaking, just want mutual aid to be voluntary. Even if you like government programs such as Social Security, Medicare and Medicaid, you have to admit that government has screwed them up. Social Security is bankrupt. Although it accrued a $4 or $5 trillion surplus, the federal government has spent that. The likelihood of it being repaid doesn’t seem good, due to the national debt. Medicare and Medicaid have been impregnated with lots of promises but Uncle Sam is a deadbeat dad. Surely these important causes deserve better management.

Many of the commenters on the Yahoo article wonder how people living on the seasteading platforms will fend off invaders and pirates. Without all the US self-defense restrictions, I expect arms dealers will do business with us. We should be able to handle most contingencies. As someone who wants to participate in this experiment some day, it’s not something I’m worried about.

In any case, seasteading is an exciting idea. Congratulations to Patri Friedman and his team on their success. Onward and upward.

Here’s a short intro to seasteading:

The problem with sea steading, is that governments will just lay claim to the islands.

But if we play it right and earn the sympathy of enough people, they won’t be able to pull that off.

I agree, I think this has a lot of potential and I am really excited for when the first libertarian island is created.

Awesome place you have there, Brodie is right, when it comes time, the government will claim such island..

This sounds great. I like the idea of seasteading. Living in a society without bad government regulation would be nice.

This is the first article I’ve seen that sets straight the amazing amount of misinformation published in Details and picked up by the media everywhere. Kudos!

Theil threw in $1.25 mil, but that’s really just pocket change. You could build a mid-sized apartment complex with $1.25 mil – if it was on dry land, had access to municipal plumbing and electricity, and wasn’t a long drive from work.

A sea-stead colony would need access to fresh water, food – both animal and vegetable, and electricity at a capacity I just don’t see getting provided with these pretty little art projects. You’re painting a picture of a Manhattan in the Caribbean. It’s going to look a lot more like Gilligan’s Island.

I’m all for seeing sea-steading take off. But I think you’re setting up some really sky-high expectations.

Huh? What did I say exactly that paints a “picture of a Manhattan in the Caribbean?” Not seeing it. I didn’t make the video, it was just relevant. No one is saying that $1.25 million buys the full package of a city in the sea.