I’ve been working on manifestos for a couple years now but they always seemed like unstructured whining. This one is different. This manifesto is leading to a practice that can grow the liberty community and advance us towards the new strategy we need to achieve a voluntary world. 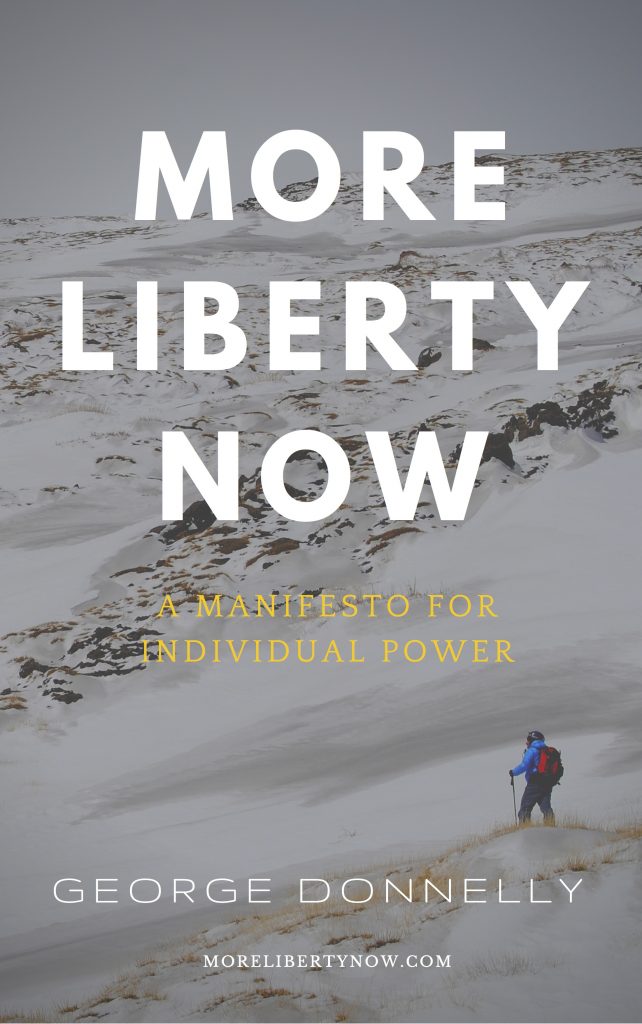 I dream of a different world, one where human rights are universally respected, where every person has the freedom to realize their potential, achieve their dreams, provide for their loved ones, live their life according to their own vision and innovate in the service of humanity.

I dream of a world without aggression, where people aren’t enslaved, where the economic playing field isn’t tilted for the benefit of any privileged group, where people aren’t thrown in cages for growing the wrong plants or disobeying the arbitrary dictates of the ruling elite.

I dream of a world without nation-states, a voluntary world with governance structures that are directly accountable to their customers, where security, social safety net and dispute resolution companies operate in the marketplace and are thus subject to competition and consumer choice.

I dream of an end to wars of aggression, to the persecution of the weak by the strong, to the punishment of victimless crimes and to the exercise of illegitimate state power, power created and sustained through the use of aggression.

It’s time to turn that dream into a plan and a todo list. That’s what this manifesto is about.

Plan A is no plan at all. It consists of a million and one tactics, everything from growing your own eggplants in the backyard and canceling your voter registration to running for office as a Libertarian and buying bootleg baby booties with bitcoin.

It’s been 45 years since the founding of the Libertarian Party. We’ve got agorists trading on the darknet, we’ve got activists getting arrested for handing out pamphlets, we’ve got pizza delivery guys running for the US Senate and we’ve got loners relocating to the icy mountains of New Hampshire.

None of it is working. No one has the answers. No one has a strategy for getting us from here to a voluntary society.

And there is no libertarian moment.

It’s time to admit all that and start an honest conversation about growing our community in a new direction.

The alternative is another 45 years of grinding ourselves down against the the rocky outer defenses of the nation-state. And, when that fails too, then what?

The world is burning in the fire of aggression. Wars murder, rape, pollute, handicap and steal. Economic colonialism pushes resources into the pockets of the state-connected elite. The courts funnel any but the rich into the prison system. Cops are roving assassins.

Property is a fluid concept, subject to the whims of those in power. Security is only for those who can afford it. Justice is a joke. Liberty is an obscenity.

The schools are brainwashing centers where children are denied their intellectual heritage.

The future of humanity is at stake. The question is whether we, our children and grandchildren, will vaunt into an ever brighter future or fall back into a new dark age.

Will we have a chance at a better future, to be owners of our destinies? Or will we be the disenfranchised losers in the dystopian reality designed by the state-connected elite?

Liberty Wasn’t Lost in a Day

It’s easy to paint a depressing picture. Moral outrage comes fast but leads to nothing. Analysis and finger-pointing are what we’re good at. Imagining better futures is just the first step.

The status quo rose to power over decades. The nation-state is 60 centuries old. We can’t jump straight from here to libertopia. We have to build it up over time.

But what are we building?

This manifesto introduces a strategy for achieving individual liberty.

Strategies in the liberty community are rare. People have favorite tactics — laundry lists of them — but ask about strategy and everyone turns mute.

The strategy of this manifesto is to build individual power. By building up your individual power, in parallel with that of an unilimited number of similar people, we will unfold a powerful group that can live in complete liberty on our own terms.

We’ll have a movement with popular, proven ideas that more people will want to be a part of.

Because you can’t argue with success.

The catch is that building individual power is hard. Here’s how you CANNOT do it.

The way we’ll do it is by building a new culture. A culture, not of perfect opinions, but of increasingly improved actions. A culture where we build each other up, person by person, day by day, action by action.

I’m talking about capitalism. Investment in human capital, yours and mine.

If you choose to join me, we’ll build a space for like-minded men and women to thrive in.

We’re taking the high road and you’re invited. But only if you can follow the rules .

Before we can make rules, we need principles. Here are ours:

In the quest for individual power, there is only one tactic: action.

There can only be one result for successful action: failure.

If you aren’t failing then you aren’t trying hard enough. You’re playing it safe.

This manifesto offers another idea: the leaderful organization.

You are your leader. You can take these ideas and apply them on your own or with a group of people, no matter what I say or do.

Start your own group or tribe or community, online or IRL. Build out in the style you want. Mentor each other and form a network.

Be a leader. Make more leaders.

I am not your leader. You are. There are no heroes, only teams with trust.

Plan A has failed. If you want something new, join the conversation.

The ideas that win are those that spread. The ideas of libertarianism are not spreading and we won’t change that trend by amplifying the same old talking points.

Go beyond the mediocre. Renounce the status quo. Declare yourself in rebellion to the ideology of going with the flow.

Accept my personal challenge to build individual power — your power.

The majority is irrelevant. Only what you do next matters.

Every Friday, starting May 13, 2016, I’ll publish a new lesson in individual power. Learn it, discuss it, apply it and grow.

I must, say, my impression is that this manifesto is positive, overall. Particularly, I was amazed you mentioned the example of cancelling one’s voter registration as an option; I did mine back in 2013 down here in Texas, so as a legal remedy, I’ve proved it works, and others have emulated my example in Illinois & Indiana, thus far.

My only concern is in regards to dealing with internal disputes. Obviously, when you mentioned “no rants, moral outrage or other drama. Save it for your journal,” and “spare the ego, heavy on the empathy” I might understand where you were coming from, however, this fails to address when there are legitimate problems with folks who claim to be on the same side, yet there is conflict between them regarding fundamentals, especially when they put into action.

For example, I don’t think Chris Cantwell’s (and now, Ian Bernard’s) ostracism from the FSP was insignificant, and neither was the “merger” between the Second Amendment Foundation and the Jews for the Preservation of Firearms Ownership, between 2014 – 2015. Just as there is such a thing as fake grievances (think “social justice” warriors), there is also such a thing as disingenuous activists.

I guess my question here is, how does one distinguish between those who are genuine (even if you disagree with them for other reasons) and those who are not? More importantly, once you’ve accurately identified them, how do you deal with them? Stefan Molyneux’s answer was ostracism, and that could also be combined with public ridicule and mockery if the actions of the disingenuous activists are severe enough (consider the whole “fake judges” phenomenon).

I mentioned cancelling one’s voter registration in attempt to gently ridicule what I consider to be an utterly useless act. What do you expect or did you gain from it?

People with conflicts should either promptly resolve them or go their separate ways. Those are the only two reasonable choices I see.

People like Cantwell and Bernard/Freeman purposely engender conflict because it serves their parasitic business models. I have no time for either one of them. Do you?

How do you identify who is genuine? Each person has their own criteria and associates or not, as each sees fit. This manifesto is not about forming just one organization but about dozens of loose networks in which individuals support each other by following the principles/rules towards the strategic goal.

How do you deal with bad actors in the context of today? Out them and move on. Like I did with Kokesh. You didn’t see me going on and on about it. I presented the facts and let others followup, which unsurprisingly, they almost entirely did not. The prominent aspect of the current culture is about who has the most views or the biggest name, something that needs to be of tertiary importance in the culture I want to build.

What do you think?