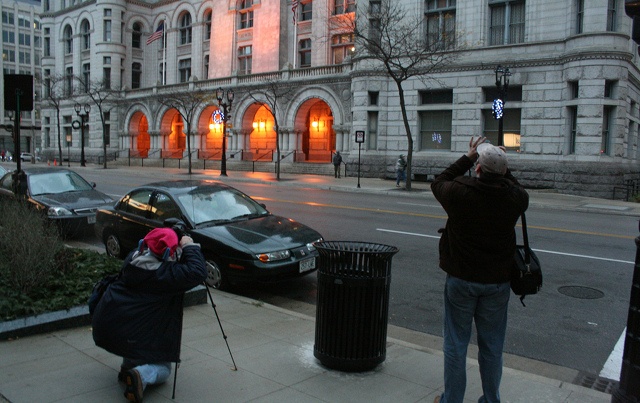 Libertarian activist Antonio “Bile” Musumeci got the feds to say “uncle.” The US attorney in Manhattan settled Bile’s lawsuit for $1500, attorney’s fees and an agreement to inform federal cops of the public’s “general right” to photograph federal buildings. The lawsuit stemmed from Bile’s arrest in Manhattan for videotaping Julian Heicklen as he handed out fully informed jury pamphlets.

Hahahahahaha. Pardon me. That’s absolutely ridiculous. This little settlement, full of loopholes for local regulations and orders, will not stop the harassment any more than the DHS Special Security Bulletin on photography of federal buildings stopped the May 11 attack on me in Allentown. The law you find on the books is academic. Cops make the law. Cops decide who to arrest and on what pretext. That’s where the rubber meets the road. And that’s why we desperately need competition in the sphere of police services. No, not the crony privatization that produced Blackwater. We need to mutualize police services. Let police departments earn their keep voluntarily with direct accountability to their respective communities.

As Reason writer Brian Doherty notes, cops have an enormous ability to make hell for people over nothing at all. All it takes is an accusation. You’re in jail. You have to pay bail and hire a lawyer. Your family is distraught. Your livelihood is at risk. Meanwhile, the cops are swearing out lies to use against you in court. Guilty until proven innocent. Bile’s settlement will not protect anyone against that.

Don’t get me wrong. I commend Bile for his courage and his determination. Congratulations to him on his victory! I just want to place the state’s settlement in the appropriate context. See the text of the settlement below or on Scribd.com.

This is but one paving stone on that road called Liberty.

Perhaps this will help you George in any future legal action you might take against the National Government’s agents who abused you, and lay another paving stone in the road.

This is a small rollback of a small tyranny on paper only by bureaucrats. It has nothing to do with liberty.

I’m not sure I’d call the local thing a loophole exactly. The Feds can’t speak to local rules but legally this settlement was about my arrest and the reasons for it alone. There is certainly a case to be made regarding local rules/laws based on the 1st and 14th Amendments but those can only be challenged specifically.

With this settlement it should help open it up so those rules can be challenged (should it be on federal land).

“… absent a written local rule, regulation, or order” is a loophole they can drive a truck through, especially when the judges and marshals responsible for courthouse security are willing and able to protect their little fiefdoms from camera shutters at any cost.