L. Neil Smith reports that US Marshals and domain registrar GoDaddy leaned on him to remove an article from his Libertarian Enterprise website. Why? GoDaddy said in an email that the article “will need to be immediately removed from the website [ncc-1776.org] for the safety of the Federal Judges and their families.” A full 6 months ago, Smith published the offending article by writer Jim Davidson about the three judges in U.S. v. Pineda-Moreno who voted to allow feds to secretly put GPS trackers on private individuals’ cars without a warrant. The article includes the judges’ home addresses and not so subtly suggests that they should be held personally accountable. The full text of the censored article is available after this post.

Happened to a Redditor

The warrantless GPS-tracking issue is no isolated case. Four months ago, a fellow redditor found one of these devices on his car after a trip to the mechanic. After reddit voted up his post, the FBI sent 6 agents to his house to demand it back but refused to acknowledge their acts publicly. The judges in U.S. v. Pineda-Moreno endorsed this practice of secretly placing these devices on cars in public spaces – and even in your driveway! 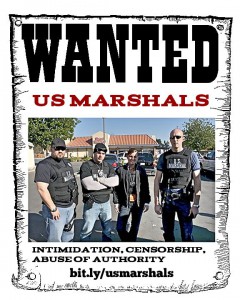 Say what you will about Davidson’s angle or word choices, all he did was give judges Diarmuid Fionntain O’Scannlain, N. Randy Smith and Charles R. Wolle a taste of their own medicine. Is what’s good for the goose also good for the gander? Is not turnabout fair play? Should the feds be able to secretly track people’s locations even without a warrant? If you believe so, as these judges do, then be the first to abide by your own rules. Reveal your location to the people you would track. According to Davidson, all of this information was already publicly available. All he did was put it in one place.

A disclaimer: I don’t support the first use of violence and I consider the use of defensive violence against the US government to be currently impractical and unwise. That’s why, in addition to reasons of news value, I am reposting Davidson’s article. “Those who make peaceful revolution impossible will make violent revolution inevitable,” said John F. Kennedy almost 40 years ago. Those who abuse their already illegitimate authority and use extra-legal intimidation to crush free expression are making peaceful revolution impossible. The marshals have a history of this. It needs to stop.

May the Streisand Effect Begin

Please repost Davidson’s article [html, txt, pdf], the above Wanted poster and any other media you create or find. The feds want to quash information? Say hello to the Streisand effect.

Got a Domain with GoDaddy?

GoDaddy is not a reputable or reliable domain registrar. If you have a domain with them or one of their subsidiaries, I urge you to find another registrar immediately. There is no sense in risking your domain name. I have personally experienced years of excellent service from PairNIC. They are based in the US though, so you might want to take your domain offshore. Gandi is a French registrar I recommend. Joker.com is another good one and is based in Germany.

“They’re Here… …and Here, and Here” by Jim Davidson published August 29, 2010 at The Libertarian Enterprise.

A three-judge panel, consisting of Diarmuid Fionntain O’Scannlain, N. Randy Smith, Circuit Judges, and Charles R. Wolle, Senior District Judge, voted in the case of U.S. v. Pineda-Moreno, No. 08-30385 [PDF] that
the DEA and other pigs are not expected to get a warrant to trespass on the private property of a driveway to attach a GPS device to someone’s vehicle and then follow that person’s movements.

You can read all their foolish ideas here (a .pdf file) [also here].

So, let’s find them, shall we? These nice men want you to know all about where they live, so you can attach a GPS device to their vehicles and follow them around. Or, come visit them with torches and pitchforks, or candle light vigils, or the like, one presumes.

And we find out that Diarmuid has chambers in Portland, Oregon.

So, that’s a rare name, we visit Whitepages.com and find out sure enough there is a listing.

So we stop by Google maps and find his home.

Satellite/aerial view shows that is a very nice house. Across the street, a car is parked on the street. Street view shows some lovely flowers out front, a nice two-story frame home. Gosh, a wood house. Someone who doesn’t believe in your reasonable expectation of privacy lives in a wood house.

It isn’t completely clear that there would be a driveway, or garage, for each of these houses. There is one just up the street, but I think that’s for another house on the hill. Anyway, it would be irony indeed if this despicable judge were parking on the street.

It says there that he maintains a residence in Pocatello, Idaho.

And here that residence is:

Pebble Lane has some very nice homes on it, all with garages. And is that a golf course behind the houses? Wow. Very swanky real estate. It must be nice to be a federal judge and get to stifle individual liberty.

It bears mentioning that “Smith” is a fairly common name, and this is not the only Randy Smith in Pocatello. So phone him up before you stop by.

Wolle was a bit harder to find. Visiting wikipedia you might think he was in Iowa. But it turns out that the part to notice is the National
Judicial College, which is in Reno, Nevada. He seems to be this fellow, living nearby in Gardnerville.

Available aerial photo shows it to be a new development, near a golf course. I guess the water rights are in, but the irrigation isn’t complete. Say, you try growing a golf course in a desert. Heh. But, money galore, judging by the size of the house and the circular drive. Gee, I wonder if the son of a bitch parks in his driveway.

Anyway, there they are, the current crop of parasites in the government to assault your individual liberty. Their opinion was
“rendered” back in January, but a larger panel of the 9th Circuit decided to affirm what they chose. I haven’t bothered to look for all those people. Do I have to do everything for you?

Best wishes for more freedom when these parasites get jobs in the private sector. Or, anyway, stop infesting your life.

If a bunch of cross-dressers want to attack individual liberty, to hell with them. Because to hell with them. That’s exactly as much eloquence as I can muster. I am not burning down their homes, I am not murdering them in their beds. And I am not advocating that any person ever do anything of the sort. But if it were to happen, who would mind? If they were individually and severally dying in a fire, I would not urinate on a single one of them to save their lives.

Great job again, George. Looks like you got the font to match up nicely :o )

I thought that judges use a “work name” that’s different from their real name, to prevent this sort of problem.

I have never heard of that idea.

GoDaddy is the worst. The one time I used them (several years ago), I had a small newsletter attached to the website registered through them. One person (who’d signed up through the double-optin setup I had) complained I was “spamming” and GoDaddy asked no questions, just took my domain and sent me notice that I could “appeal.”

It took two months to get it back. Meanwhile, the site and all of the work and marketing I’d done with it was now gone. I’ve never used them since.

If you need just very basic hosting I have heard dreamhost and hostgator are good, but I haven’t used them myself. I use VPS’s and dedicated servers usually.